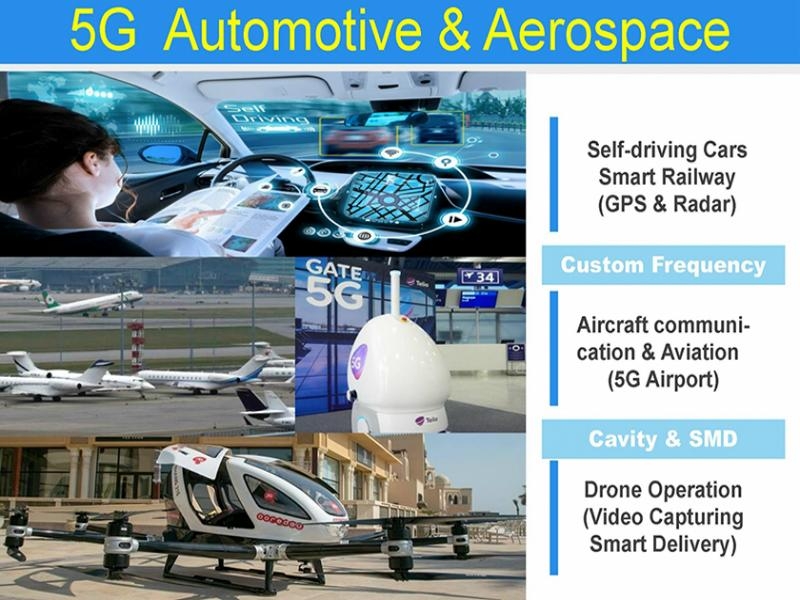 5G technology provides the intensive data in high-speed to support autonomous driving cars (self-driving), also lead a disruptive change in aerospace (aircraft communication & aviation). Because 5G characteristics can reliably transmit huge amounts of data at ultra-fast and with low latency. That is crucial to support, for instance, direct instant communication between the vehicles of the future, and drone widespread.

Automated cars must be aware of their surroundings. They must use built-in cameras and sensors, such as radio detection and ranging (Radar) and light detection and ranging (Lidar) technology that enable them to sense and interact with the environments around them and build on the information available from maps and GPS. Another important future development aim for autonomous driving is Vehicles must communicate with each other and with roadside infrastructure, as referred direct vehicle-to-everything (V2X) communication. However it is complex to process the plenty of information required for safe driving and meanwhile to communicate with other vehicles and nearby objects, including pedestrians and traffic lights.

3.4-3.8 GHz, 5.8-5.9 GHz spectrum has been allocated for globally dedicated to V2X communications, a lower carrier frequencies, such as the 700 MHz band designated for V2V communication in Japan. The following two common standard approaches are adopting:
★Dedicated short-range communications (DSRC) in United States, and Intelligent Transport System G5 (ITS-G5) in Europe are based on Wi-Fi protocol 802.11p.
★Cellular V2X technology (C-V2X) is a protocol that allows direct communication (not using mobile infrastructure). It is based on LTE now, but in the near future, it will be based on 5G standards.

With the help of 5G, Drone can operate through low level airspace. It can be piloted from any central location and by 5G internet connecting with aircraft sensors system in real time, which to support delivering multimedia input. In the future, Drone could be used to provide many services e.g. civil surveillance, deliver packages from distribution center to the client, and provide personal mobility services. The most commonly used frequencies for controlling drones (from ground to air) are the license-free radio bands: 433 MHz, 868 MHz, 915 MHz, 1.3 GHz, 2.4 GHz, 5.4-5.7 GHz and 5.7-5.8 GHz.


TEMWELL Group (sister brand Temstron) expertise is designing and manufacturing high attenuation (from 20 dB to 80 dB and more) RF Filter and Microwave Band Pass Filter and Diplexer and Duplexer. Generally speaking, our products frequencies includes sub-6GHz and mmWave up to 40 GHz, and future object is support up to 60 GHz. Until now we have technologies include helical (or called helix), cavity, waveguide, interdigital, dielectric, ceramic, comb, LC, stripline etc. They provide high attenuation, good group delay, flat ripple, low loss and stable vibration and temperature in designed frequencies bands requirement. Package offers Pin (thru-hole), Connector, Needle and Surface Mounted Design for indoor and outdoor (IP-rated) application.
Please Contact us to find the design that suits you. Our RF Microwave Filters products is made in Taiwan, have passed various tests and certifications with reliable quality. Reference: Mechanical TestMore reliability test including temperature test we can support to do if you required.Click "like" on our facebook, you can follow featured product news in real time.https://www.facebook.com/temwellhttps://www.facebook.com/temstron